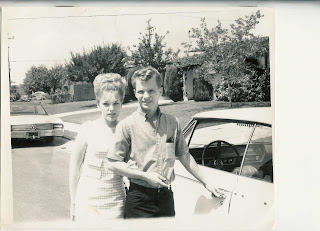 My mom has been on my mind lately and I don't know why. I thought if I blogged my thoughts it would help me figure it out. We have a very unusual relationship. We live several states away and it has been four or five years since I last saw her. The last few years we have only talked on the phone on birthdays or holidays. This has a lot to do with the boundaries I had to put up. I struggle with what I want to say because I have said so much already in my book. I also have things on my mind that I did not talk about in my book. As I finished writing my book I was given a giant puzzle piece that involves my mom.
Some of you know this and some may not, a few months ago I found my half brother. I had not seen nor heard from in 30 yrs. We have the same mother but different fathers. The way it came about was, in my eyes, a miracle. I had been quietly searching for him for at least 20 yrs. I say quietly because we never talk about things in our family especially things that have to do with the past or confrontations. Things get put under the rug and never get dealt with or resolved.
On a whim I asked a very wise and helpful friend if he knew how I could try to locate my brother through the high school alumni site he helps maintain and oversee. Within hours he and another wonderful wise friend found information for me to contact my brother and informed me that I had been mispelling his last name, all these years by one letter. (*Thank you Larry and Shirley, I will forever be grateful)
My brother is three years older than me. My mom and his dad married when my mom was 15 and she had my brother when she was 16 yrs old. Two years later she left her husband and my brother and met my dad. She became pregnant with me almost as soon as they started dating. They decided to get married July 1965. I was born March 1966. My mom was 18 years old.
Without saying everything that I cover in my book, in a quick nutshell....she and my dad divorced when I was five years old. Although they had a rough start to their marriage they were both committed to one another, in love and were looking forward to being a family. The end of their five year marriage was a different picture, it was filled with adultery, accusations, alcoholism, deception, anger and sadness.
As I mentioned, I have a half brother that I knew nothing about until I was around the age of eight. One day I was feeling very sad and missing my mom (my dad had physical custody of me and I was only allowed to see my mom twice a year, at this time in my life), my dad tried to comfort me but when he recognized it was not working he decided to tell me my mom was not the great mom that I thought she was...according to him she had abandoned me just like she had my brother....I looked at him very confused and then he said, "its time you know....your momma was married before she married me and she had a baby boy. She left him. She abandoned him". I remember feeling angry at my dad because I just knew he was lying. He swore it was true. Fast forward two years and I am visiting my mom and step dad (she married for a 3rd time right after her divorce from my dad was final) for my usual summer two week visit. That is a visit that is etched in my mind forever. That is when my mom told me I did have a older brother. He had located her and wanted to meet her. They arranged it so that I could also meet him.
I dealt with a lot of guilt for not believing my dad in the first place. I also dealt with a lot of other emotions as I realized my mom may not be the mom I thought she was. I will fast forward this to tell you we had contact with my brother for a little over year or so and then as quickly as it started it just ended. No one said why or what happened and I never asked, I some how knew not to.
I was overjoyed when I recently connected with my brother. I have felt he was a missing puzzle piece in my life. We continue to talk and email back and forth as we slowly get to know one another.
An unexpected gift in this, is that I have now become friends with my brothers father. I would have never guessed this in a million years. I know he would not have either. Through his stories, memories and the many photos he has shared with me I have pieced together more of who my mom is or at least who she was.

Some of the things I have realized about her are that the three men in her life who she was married to-they all loved her deeply. They all three fell hard for her. They thought she was beautiful. I also think they all wanted to make her world better. She came from a very hard background and her family life was very sad. All three relationships had lots of drama but they each have kept parts of her i.e photos and memories of the good times. They all have said at different times that she was a hard worker, not afraid to do what needed to be done. She was a good cook. She was clean and neat and orderly. She loved to laugh. She was beautiful. She loved to be around people. She loved to have a good time. She could be kind and generous. There are other things as well, she was very jealous and always suspicious. She accused each of them of infidelity. According to two she cheated on them while she accused them of cheating on her. Drinking and arguments seemed to be very prevalent in each relationship. The end of all three relationships were filled with anger, accusations, deceit, and a lot of sadness.
Over the years my mom has shared bits and pieces of each relationship, some of her stories match up with each of the theirs but most do not. There seems to me, to be enough consistency and patterns in all three relationships that I lean towards not believing her story's. I do not think my mom is lying or making things up, I think she really believes all of the things she has said over the years. It took me years to figure this out. I am still trying to figure some things out and find out who my mom really is. What I do know is that the things that are mentioned about her are all true and exactly how I know her to be as well. TO BE CONTINUED...... (the photo is of my mom and dad in 1965 right before she became pregant with me)
Posted by Unknown at 2:47 PM