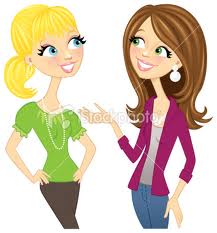 I recently had a conversation with a friend about the fact that many christian parent's allow their teenage daughters to wear clothes that leave very little to the imagination. I recalled a few years ago, when my daughter was in high school, I was at a parent meeting and the topic of enforcing the dress code came up. One mom in particular stood up and said, "As a mother of a sixteen year old boy, I am asking that all of the parents who have daughter's, please enforce the dress code rule with them. My son has a hard time paying attention in class when he sees bra straps, cleavage, and thong underwear peeking from under the shirt that is to short and the pants that are to low." Some parents nodded in agreement and other's took offense and basically told her it was her son's problem and he needs to learn to mind his own business.
This conversation has stuck with me for years, and especially more so now that I have a son who is soon to be thirteen.  It's never easy to tell someone what they are wearing is inappropriate (at least for us non-confrontational people),  however, there have a been a few times when I have told a women and also a teenage girl, that their underwear was showing.  The woman was a mother at the school I worked at. She was sitting on the floor with us during devotion time and her thong underwear was showing.  There was two rows of children behind her, as well as other adults.  I gently tapped her on the shoulder and said,  "excuse me, but just so you know, you might want to pull the back of your shirt down, your underwear is showing." She was embarrassed and I was embarrassed for having to tell her, but she said, "thank you", and pulled her shirt down and kept putting her hand behind to check it.  The other time there was an older  teenage girl sitting in front of us at church and it was a similar situation and I felt embarrassed once again, but I whispered to her and she looked at me and said," oh, it's OK" and I said, "honey, no it's not, my husband and son are sitting back her and I prefer that they not focus on your underwear during service".  She looked back at me and breathed a heavy sigh (as if she was annoyed with me) and put her sweater on for the remainder of service.
Both times I felt embarrassed, but I also felt like if it were me, I would want to know. It would not be intentional on my part!  Every time I have this type of conversation with other women they always agree with me and the scripture of Titus comes up: Older women likewise are to be reverent in their behavior, not malicious gossips nor enslaved to much wine, teaching what is good, so that they may encourage the young women to love their husbands, to love their children,  to be sensible, pure, workers at home, kind, being subject to their own husbands, so that the word of God will not be dishonored. Titus 2:3-5
As older women, it is important that we speak up and mentor the younger generation. As mothers it is important that we teach our children to obey the rules (even if we disagree with them). As women it is important that we remember and we teach our daughters that God created men (and teenage boys) to be visually stimulated. Unfortunately, I think in today's society, we have become desensitized and what was considered inappropriate to wear in public at one time, has now become acceptable.

I would like to challenge all of the women whether you are a mother or not, let's be accountable and model appropriate clothing for our daughters and young girls everywhere. Let's also encourage our daughters, nieces, granddaughters, friends, to also be wise in what they choose to wear.  We don't have to be prudes by any means, but we can find hope in how we present ourselves.
Here are three quotes that I have kept over the years that my pastor, Chris Williamson has said.
"The clothes you wear are like bait...certain kinds of bait attract certain kinds of "game". What kind of man are you trying to attract?"
"Knowing who you are dictates how you live"
"Don't allow yourself to be a stumbling block towards Jesus"
Posted by Unknown at 5:00 AM